In 2006, I was part of a team sent to the Tokyo Game Show; our objective was to meet as many companies – publishers – as possible within a three day time frame, and present our game to them to garner feedback and follow up on those who were interested in taking our business relationship further. 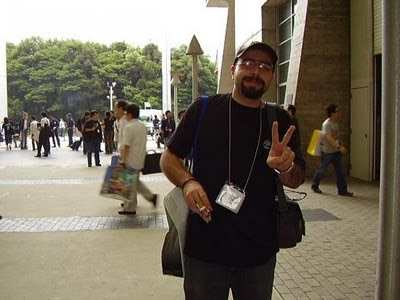 That’s me at the TGS 2006; crooked glasses, full of hope and no sense of fashion whatsoever; a geek in Otaku heaven
Our first meeting was with the Konami reps at 8:00am; needless to say that we were really nervous to head start the day with such a big name, but we put on our best and we wanted to present our best! we were really hoping we could make it.
Meeting time came and the vice president of Konami of America came into the room; we introduced ourselves, offered our business cards and started a bit of small talk before the presentation to break the ice. He noticed our names were peculiar – mine especially since the other two with me were Joseph and Osama both household names – and asked where were we from, and when we answered Jordan he was shocked; Not only because there’s a game development house in Jordan, or in the middle east, or that they came all the way to Japan to do business … no, he was shocked because he didn’t know people played games in the middle east to begin with.
Now when you hear such an esteemed professional from a company that brought perhaps the middle east’s most popular game: Winning Eleven – that they didn’t consider the Arab World/ Middle East as a market for their products you’d realise that there’s something seriously wrong going on.

Naturally he’d think: “how come a lot of people play of our games and we’re not getting sales figures?” the answer was simple: Piracy. But that’s a subject to another post.

And as the meetings went on, we heard the same thing over and over from Japanese and European companies alike: Nintendo, Namco, Eidos and lots others did not realize that there are enough gamer base in that region to even begin to establish their game development scene.
I remember something that one of the Nintendo guys told me that day, he said that we have something no one else has, we have a new cultural influence to offer to the world; that there are Japanese, European and American schools of design, you can look at a game and tell were it came from; they also presented their cultures relatively highly in games, we played Samurai games, western games, medieval games and so on.
We have the opportunity to view the game world from a fresh pair of eyes and whole different background.
The Ubisoft CEO said, that even when European studios tapped the middle eastern culture with Prince of Persia, it was a major success because it was simply “something new” and we had the making of that ‘something-new’ everyone is looking for.
Five years later we are still to deliver on our potential.
First development houses 2005 – 2008
While the middle east has been an active gaming hub for almost two decades, it’s explosive period is without a doubt 1996-97 onward; with the playstation becoming a standard home purchase. when that generation matured enough to want to take on creating games themselves they formed numerous fan-boy clubs; a bunch of guys working on their own project/mod.
Most noteworthy accomplishments of that era were teams that created mods on the half life engine or other games that offered complicated map editors for their respective fan base. The mods mostly dealt with political issues and ideals which greatly limited any chance of success outside their limited circles. 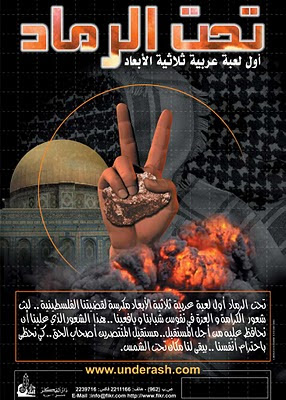 This is an example of such games; marketed as the first 3D Arab game that deals with the events in Palestine; it was a half life mod
The main problems that faced those teams were lack of community; internet was still in it’s development period, and Arab technical forums – all though now barely starting to rise – were virtually none existent; there was no way for a mod/game to find audience outside a small circle of friends and supporters.
The period of 2006 to 2009 saw the rise of investors creating serious companies that aim to make it or break it in the game industry. It was also a different time, and these start up companies wanted to tackle it in what now we view as a questionable matter, they wanted to dive nose first into the game business the only way they knew how: creating AAA titles.
They went about it in one of two ways: either build a team and create their own original IP or purchase a complete product and localize it for the Arab market.
Both strategies failed.
Lack of experience of the management as well as the staff of those companies made them miss the difficulty of their task. Talent was hard to acquire and when met it would be raw and require training; programmers never dealt with virtual 3D spaces before and graphic designers mostly never know what a UI is.
But that wasn’t the major issue, there are several issues that attributed to the companies eventual demise: 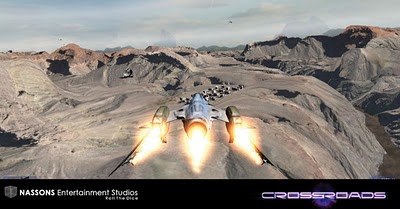 I’m not just saying this because I was part of the team that developed it, but CROSSROADS was perhaps the best ME game to never see the light; it was developed in house 100% by a team that started with nothing but passion

The companies that survived this period were the ones that shifted to casual flash games or the ones that started with mobile game development to begin with. As the console market got harder for everyone world wide, the rise of Facebook and the internet made casual gaming the optimum space for development. especially for start ups with relatively volatile capital and little experience.

Perhaps the only success story from the previous era was a browser game called Travian. All though it wasn’t developed by a middle eastern house, it was localized and aggressively marketed toward the gulf region. it was a great success; millions of players joined and thousands purchased virtual goods earning the company almost 200,000$ a month for a period of two years.

inspired by Travian, 2009 was the beginning of a more mature era of game development in the region; particularly in Jordan with 6 development houses starting up aiming to go head on with the casual gaming market, only 2 survived in Dubai (one of them was initially Jordanian before moving their offices). Companies have learned a very hard lesson from their predecessor’s that didn’t make it and made it their objective to take it slow and one step at a time.


but perhaps a little bit too slow.

to this day, the most popular casual games marketed for Arab players are card games (Tarneeb, Trix and Baloot)

In the light of the Yahoo-Maktoob deal, aiming for the web wasn’t a bad decision at all; and every start up had that target of ultimate acquisition by larger firm.


Who knows, maybe it would happen again.

4 thoughts on “Game Development in the Middle east: an introduction”